News About Our Firm 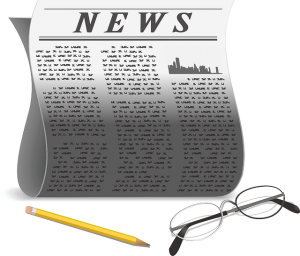 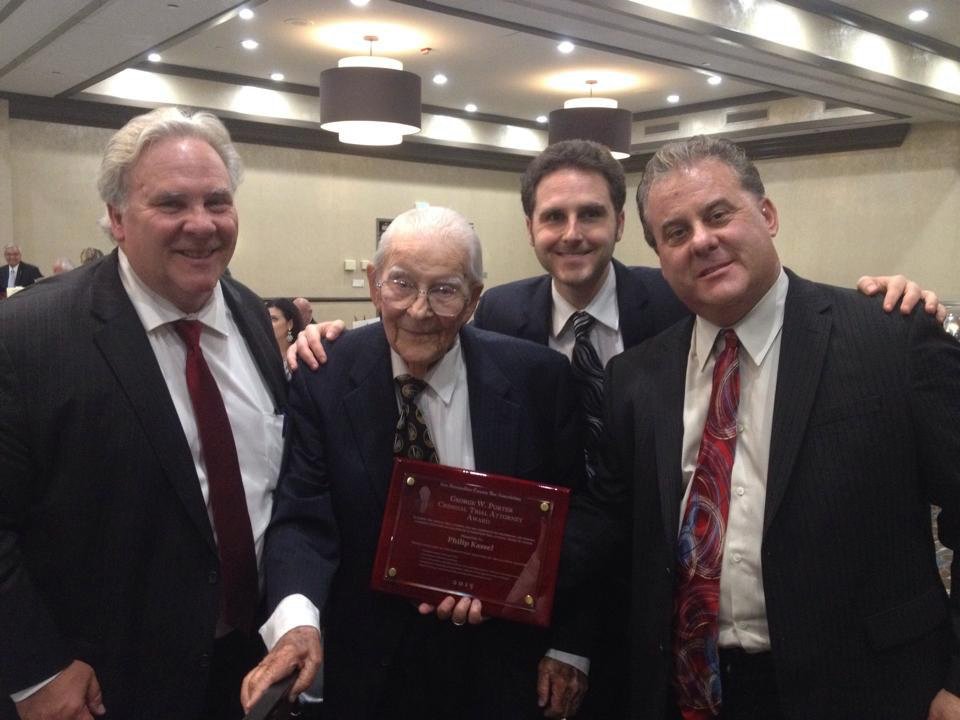 Presented to a criminal law attorney whose career-long accomplishments demonstrate the following qualities: 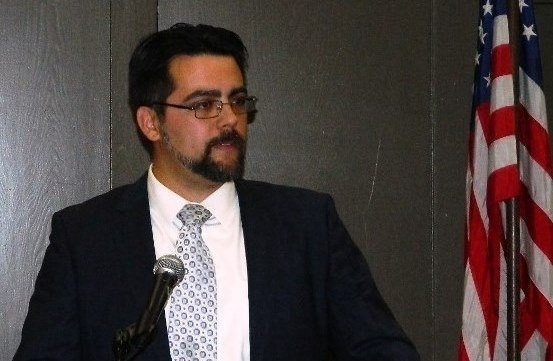 "For those that did not attend the installation dinner, the prestigious George W. Porter Award was given to our very own Philip Kassel. Mr. Kassel graciously accepted and stated that the evening was one of the more memorable nights in his life. He accepted the award the night before he was to fly out to Washington D.C. to meet with President Obama as a member of the greatest generation - as one of the remaining survivors of World War II. It was a wonderful and enjoyable evening." -Victor J. Herrera, President, San Bernardino County Bar Association

(San Bernardino) – As a child growing up in downtown San Bernardino in the 1930s and 1940s, Philip Kassel always marveled at the extravagant county court house as he passed by nearly every day to and from Jefferson Elementary School.

The building’s classical Italian Renaissance-style architecture and colonnade of concrete columns beckoned Kassel into its courtrooms, where he said he would regularly observe trial proceedings and hearings.

It’s how he fell in love with the law.

“Sometimes the bailiffs would run me out,” said Kassel, 86, who still runs his criminal defense practice, Kassel & Kassel, with son Gregory in San Bernardino. “I knew by the time I was in high school I wanted to be a lawyer. It seemed like a good way to help people.”

Little did Kassel know that his passion for law and justice would become a family affair. Both his sons, Sanford and Gregory, became lawyers and practice law in San Bernardino. And on Wednesday, Nov. 28, Kassel’s grandson, 28-year-old Gavin Kassel, was sworn in by San Bernardino Superior Court Judge Michael Dest as the newest member of the Kassel clan to become a lawyer.

“I just wanted to be able to follow in my family legacy and thought practicing law with my family would be a dream come true,” said Gavin Kassel, 28, of Laguna Niguel.

While an undergraduate at UC Santa Cruz, Gavin, son of Sanford Kassel, studied film and initially entertained the idea of pursuing a career in the film industry. After much consideration and deciding the film business was too cut-throat for him, he opted for law school instead.

“In law you can really help out other people. You can do a service for your community,” Gavin said at San Bernardino’s historic Mug restaurant on Highland Avenue, where his family and friends gathered following his swearing in ceremony Wednesday,’

Gavin, who graduated from the University of West Los Angeles School of Law, said he’s interested in the burgeoning area of Internet law, especially the areas of Internet fraud and defamation.

He said he owes a lot to his family who inspired him and the San Bernardino Superior Court judges who mentored him during his externships: Dest, Michael A. Smith and Donna Garza.

And if having a father, an uncle and a paternal grandfather in the legal profession weren’t enough, Gavin’s maternal grandfather, Joseph Katz, 93, is a retired San Bernardino Superior Court judge who was one of the most senior judges on the bench at the time of his retirement.

Family patriarch Philip Kassel said he never pressured his children to pursue careers in the legal profession, but is certainly happy with his sons’ and his grandson’s career path choices.

“I feel good about it because I’d like to think the law will benefit from Gavin because he’s so interested in people and wants to help people,” Philip Kassel said. “He’s not interested in getting some corporate job and earning a bunch of money. He wants to help people, and I feel good about the fact these kids want to be productive and contribute to society. They’re in a profession that can make a difference.”

Like his father, Sanford Kassel, who specializes in civil litigation and has run his own practice in San Bernardino for more than 30 years, said he never pressured his son to enter the legal field.

“From generation to generation, no generation has pushed the other to go into law,” Sanford Kassel said of his family. “We just enjoyed watching our elders do it and decided to go into it ourselves.”

Former CAO settles whistle-blower suit against Board of Supervisors for $650,00

(San Bernardino) – In closed session this morning, the San Bernardino County Board of Supervisors agreed to settle a whistleblower lawsuit brought by former County Administrative Officer Mark Uffer in May 2010. Jury trial was scheduled to commence on April 2, 2012.

The vote to settle was 3-2. Chairman Josie Gonzales, who is said to have been pushing for a settlement, along with Supervisor Gary Ovitt and Supervisor Janice Rutherfordvoted in favor of the agreement. Supervisors Brad Mitzelfelt and Neil Derry voted against it.

A press release was immediately issued by the county defending the board’s decision. “The County agreed to settle only to avoid the costs of going to court. The County does not believe any new information would have emerged during a trial, and in agreeing to the settlement proposal the County maintained its disagreement with all of the plaintiff’s claims.

“Attorneys estimated the trial alone would cost the County at least $400,000. The proceedings, which were set to begin April 2, in addition to even a moderate settlement, award or judgment, could have pushed the County’s costs beyond the settlement that was achieved today.”

However, Supervisor Derry issued his own statement. “The apparent lesson for all San Bernardino County employees to learn from this is even if you are an at-will employee and are terminated, go ahead and sue us because we are going to give you a lot of taxpayer dollars,” Supervisor Derry said.

The San Bernardino County Board of Supervisors had already authorized and spent in excess of $1 million in defending the suit. The board flew in outside counsel from Northern California and sometimes was represented by as many as five attorneys in court for even simple motions.

The settlement was mediated by retired Superior Court Judge John W. Kennedy, Jr., who the county says indicated he felt it was fair to both sides. Uffer originally sued for $15 million.

Uffer filed suit after being terminated without cause on November 17, 2009, in a 3-2 vote as authorized by his contract and county ordinance. He was given a one-year severance package as part of that contract and separation.

Uffer alleged that he was fired because of his cooperation with the San Bernardino County District Attorney’s office and Grand Jury. Two former members of the Board of Supervisors and two chiefs of staff have been charged or indicted for multiple felonies in connection with an on-going corruption investigation.

Uffer originally filed three causes of action including wrongful termination. The county demurred and Judge Donald Alvarez sustained the demurrers on two causes but allowed the whistle-blower cause to proceed.

Uffer issued a written statement regarding the settlement. “While I believe I would have prevailed if this had gone to court, I appreciate that the county has agreed to a settlement,” he wrote.

“Born and raised in San Bernardino County, I take great pride in my public service, serving as the CEO at Arrowhead Regional Medical Center and then as County Administrative Officer. The mutual offer to meditate and settle this case offered an opportunity to resolve a painful issue for both sides.

“I hope that everyone involved can move on and work toward the public good, and I wish the hard-working county employees who I worked with, nothing but the best,“ Uffer concluded.

In a separate statement, Sanford Kassel, attorney for Mark Uffer, wrote, “Mr. Uffer has spent literally every day of his life since the County took their actions trying to rebuild his reputation and move forward. The County understood the issues and spent over $1 million dollars trying to defend this case.

“Being from a small community and trying to claw his way back to a meaningful and rewarding job in health care has been difficult. Yes, we could have fought on, but Mr. Uffer wanted his life to return to normal.

“Mr. Uffer always took pride in his various leadership roles with the County of San Bernardino, serving as CEO of Arrowhead Regional Medical Center and then as the County Administrative Officer for the entire County. Being a local resident, born and raised in San Bernardino County, Mr. Uffer took immense pride in these achievements.

“As part of the settlement, the County acknowledges Mr. Uffer`s quality leadership role as a Health Care Executive. He always placed a high value on this fact and while serving as the County Administrator had effectively left the health care world.

“He has now returned to that career path and looks forward to putting this chapter of life in the past. There was never a moment when Mr. Uffer faltered in his desire to share the truth with the public.

“We hope that the County itself can heal from the conduct of those involved in this lawsuit. As much as people accused Mr. Uffer of seeking huge damages, this case was more about opening the books on the behavior of certain elected officials and their staff and less about winning huge awards.”